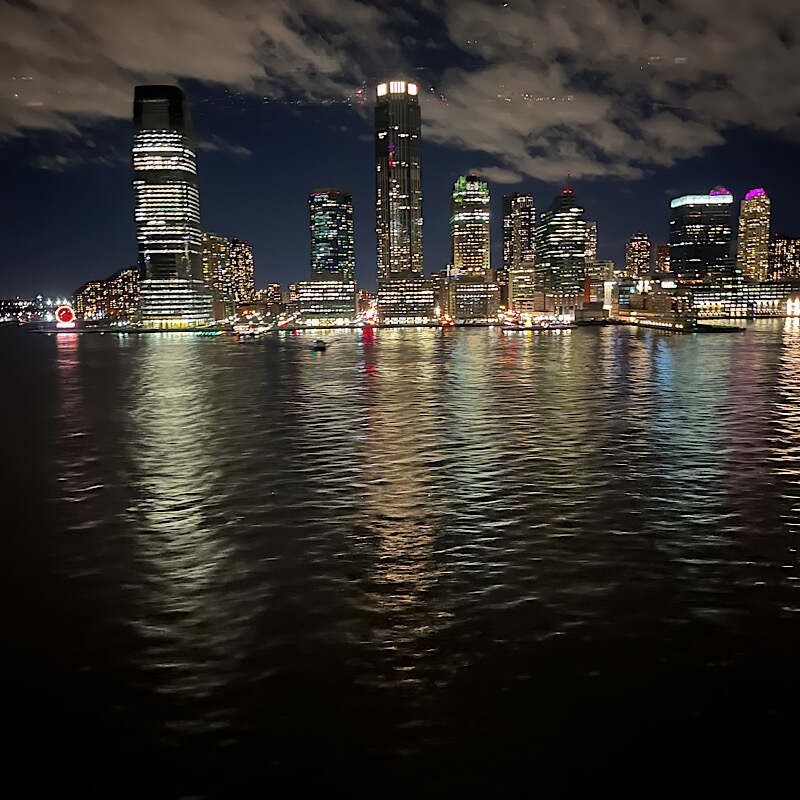 I have to say, no matter how many times I have visited New York, nothing compares to the feeling of sailing into the harbor. We were fortunate on this voyage to be berthed at Pier 90 which is in the Hell’s Kitchen area on the west side of Manhattan. It’s an easy walk into Times Square, and if you shop too much, an easy UBER back. It is common for Cunard to berth in Brooklyn when in port, which is fine but a bit of a trek into Manhattan, so we were thrilled to learn about the change of location.

I got up super early to watch the sail in from my window and blamed the fog and salt spray for the fuzzy image of Lady Liberty. But the photo on the right was taken at sail AWAY and I was up on deck with no obstruction and it’s still fuzzy. I’ll blame the bitter cold. Sigh…

As soon as we cleared the immigration process, I walked to the closest CVS pharmacy and picked up some supplies. It was less than a mile each way, and after being at sea for 2 weeks, it felt good to get out and walk. The weather was cold and rainy during our visit. My purchases were a bit soggy when I got back to the ship, but no harm done.

We were staying overnight in New York, so I had made an advanced pre-theater booking at Osteria al Doge which is on W. 44th St. right in the heart of the theater district and Times Square. It was a good call – fresh pasta made in-house and a long and strong reputation for good Italian food.

My only gripe was that the tables are ridiculously close together, but they serve as a good source of humor while trying to get up and leave with coat, umbrella, and other cold weather detritus without knocking of all of the glassware off neighboring tables.

I like live theater. I and really like musicals. The credit for success in booking my amazing seat for Hamilton goes to fellow passenger and member of our Facebook group, Robert Bianco, who notified us the day the tickets went on sale. I got an aisle seat in row H so had a fantastic view – close without being in the “spit zone”. I absolutely loved everything about it. And would pay the same to see it again. My youngest grandchildren had shown me clips of King George III from the production on Disney+ (They are 5 and 6), but I held off watching the rest. I wanted to see it first onstage. I wasn’t disappointed and was even able to adjust my ear to the cadence of rap. Just an amazing production.

Due to the weather, I took an UBER into Times Square, but by the time the show was over, it had cleared enough for me to walk back

It was nice having two full days in New York. On day two, I walked in to Macy’s which was just less than 2 miles from the pier. I really hate shopping. I mean really hate it. But there were some things I needed for the events onboard that I neglected to buy before I left, so I grumpily poked through racks and different floors until I found what I needed. I was back on ship with plenty of time to spare before sail-away. By then, the weather was cold but clear and it was absolutely beautiful sailing back out of New York Harbor. Until next time, Big Apple.

We now head south into the Caribbean and warm weather. A few more sea days first. Life is amazing.

When you park your camper in your daughter’s dri

The reason I headed south instead of continuing in

A quiet couple of days. Rainy most of the time, so

An amazing day here on PEI with Ron & Cindy! Drove