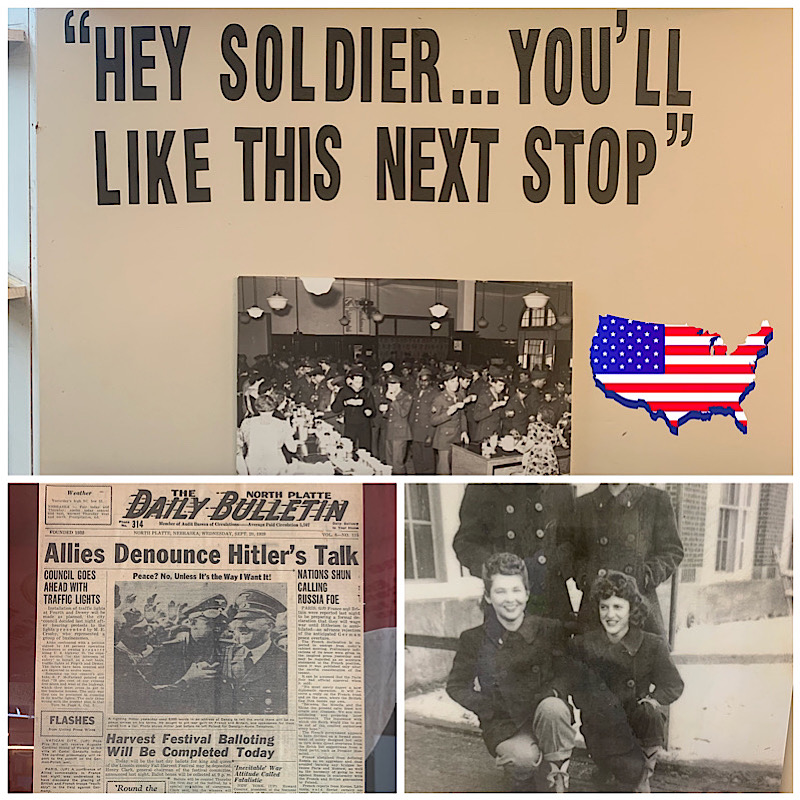 My mother passed away a long time ago – 34 years to be exact. I was 29, married, and raising 3 daughters. And there are so many things I wished I’d asked her. But I doubt there’s anyone who has lost a parent who doesn’t feel that way. One of the topics I wished I had explored further was her childhood in North Platte, Nebraska. She was born there and didn’t move to Florida until she was 18 and had graduated from high school. Her grandfather, one of the last blacksmiths in North Platte, preceded the move in the 1920’s – traveling by buggy with his wife, Mary and their possessions which included a baby grand piano that we all learned to play (badly) on.

I planned my cross country route (dash really but that’s another post) to include North Platte in the hope that I could fill in some of the empty spots related to what I remember her conversationally sharing. It was more emotional than I expected.

I was the only daughter in our family, and gender roles were very much still in play during my childhood, at least in our home. As a result, Mom and I had a lot of time together – perhaps we would have regardless of roles, but if you’ve ever been in a kitchen with two women cooking and washing dishes, you know we talk. She used to share with me what it was like during WWII – the rations, the victory gardens that anyone with a yard had, and what it was like being a teenager in high school when all the young men were gone. She also talked about volunteering at the “canteen” after school. Little did I realized what a historical phenomenon this actually was – until I visited the Lincoln County Historical Museum.

This museum is amazing for a lot of reasons – from mastodons to musicians, inside there is a lot to see. Behind the main museum, there are beautifully preserved historic homes and buildings, antique cars and farm machinery, and a blacksmith shop. You can spend hours exploring, and I did.

But the main reason I came was to learn more about the North Platte Canteen. The Canteen ran from Christmas, 1941 until April 1, 1946, was organized by a small group of women, who coordinated over 55,000 volunteers over that period. They used their own ration stamps to pay for the ingredients and served food to nearly 7 MILLION service men and women either coming back from the war or going off to fight.

On the left, take a look at the contributions required daily to feed the 3,000 to 5,000 troops that came through every day for four years. There is an amazing video in the museum that covers what it took in order for this to happen. It is incredibly moving. The now aged participants from both the women who offered this to the troops and soldiers themselves talk about what the Canteen meant to them and the war effort. And if it was your birthday, you got a cake – and sometimes, even if it wasn’t your birthday. Over time, 125 communities across the state of Nebraska contributed to the North Platte Canteen. It was an unbelievable accomplishment.

Given my mother’s age at the time, and the stories she shared with me about the Canteen, I deduced during my visit that she must have been one of the “platform girls”. To be part of this group, you had to be at least 16 years old. The girls came down after school, evenings, and weekends to hand out magazines, fruit, and popcorns balls to those who were unable to get off the trains. (Some girls put their names and addresses inside the popcorn balls and became penpals with the soldiers, but that was against the rules, so shhh – don’t tell anyone). One of the older ladies in the video said they were decoys to get the men off the train and into the Canteen. The picture on the right is one from the museum – what I would give to have one of my mother. But just knowing that she had a part in this amazing effort, is such a gift. Each train stopped for only 10 to 15 minutes, yet meant the world to these young soldiers.

I couldn’t find the video they use in the museum, but I think this one is a good quick overview. https://www.youtube.com/watch?v=Yhx-KhycbBs

While North Platte, Nebraska may not be a destination city for most, if you are anywhere near, it is definitely worth a stop. Buffalo Bill made his home there dominates recent and current marketing efforts but there is a lot more to this little town of 24,000. While I was there, Nebraskaland Days were going on and included a rodeo, an art contest, and some big name performers – Toby Keith was performing the day I left. So next time you are crossing the country or visiting the frontier states, saddle up your brontosaurus, grab a Runza, and visit North Platte!

I made it to my “Home from Home”. It’s raini

After 5 wonderful months being a snowbird in my ow

Once upon a time, a dinosaur and a unicorn came to